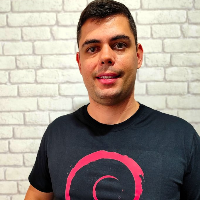 My name is Braulio Henrique Marques Souto, I was born in Ribeirão Preto, Brazil, in 1985. Since 2013 I live in São Carlos, SP, Brazil, the technology capital.

I started using GNU/Linux in 2007 with the Ubuntu distribution. I used Arch Linux and Ubuntu until I met Debian through YouTube talks in 2014, and from that moment on I started using Debian KDE on my notebook and desktop at home. Currently I use it every day in various ways for all activities.

I have been a contributor to the Debian project since my early days with Debian, talking and showing people around, doing installations, and helping with troubleshooting.

Most recently, I've been collaborating with packaging and with my first package officially uploaded to Debian Mentors on April 2022 and since then it has become one of my favorite ways to help the Debian community, with packaging. Currently I maintain the following packages: golang-github-aybabtme-rgbterm, golang-github-thoas-go-funk, md2term and ytfzf. I have also worked around NMUs and QAs and I would like to keep my packages unattended.

Before officially contributing, I did several projects with Debian, like my brauliocloud[1] file server and some packages designed to make it easier to install and configure a bunch of programs. I just have a passion for technology and Debian.

My name is Braulio Henrique Marques Souto, I was born in Ribeirão Preto, Brazil, in 1985. Since 2013 I live in São Carlos, SP, … Expand