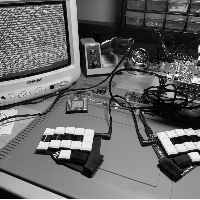 I have been using Debian for 20 years, starting with "Potato" after a friend of mine in college introduced me to it while I using Red Hat Linux and getting frustrated RPM. Since then I've used every major version of Debian since then, from personal servers to data centers to single-board computers. I even had a Debian theme birthday when "Etch" was released since they landed on the same day. I maintain a personal blog and have posted occasionally about my use of Debian over the years as well, https://www.ecliptik.com/tag/debian/.

Besides extensively using Debian for personal computing, it's helped my career as a systems administrator and as a devops engineer.

While at the University of California San Diego, I converted many old Solaris systems to Debian, taking joy in using the OS on SPARC as opposed to the usual Intel systems and giving them a new purpose. This was my first experience to non-x86 architectures and I still try to use Debian on non-x86 whenever I get the chance, learning how to cross-compile and diving deeper into system internals.

At Qualcomm I was on the Unix Configuration Management team and was the lead for the Debian and Ubuntu automated system imaging and management, running local APT mirrors at multiple global site that thousands of systems a day would use for system installations and package management. I also wrote a few .deb packages for internal tools following Debian Packaging Policy even though they would never show up outside of the company.

My current position is cloud and containers focused, and I have standardized on Debian based Docker images for all of our containerized applications.

I am grateful for the two decades of computing freedom that Debian has given me and I wish to take the knowledge and professional skills I have acquired since my friend gave me my first Debian ISO and contribute back to the project.

I am interested in adopting orphaned packages and maintaining them even if they're not heavily used in order to keep them functional for computing history. I'm also interested in helping with multi-architecture support so Debian can run on as many systems as possible. My goals are to become a Debian Maintainer and then a Debian Developer at some point as I increase my contributions and become more involved in the project.

I have been using Debian for 20 years, starting with "Potato" after a friend of mine in college introduced me to it while I usi… Expand