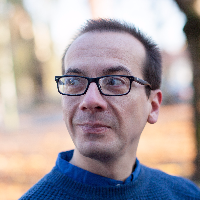 Having been interested in computers ever since my youth, I eventually became interested in computing environments that did not try to hide the underlying plumbing from the curious user, and I started experimenting with various GNU/Linux distros (and FreeBSD for a while) around 2000. My first serious exposure to Debian was around 2002-2003, when its powerful package system won me over to propose it as a server OS to be used in various server roles in my employer's network at the time. I have ever since relied on it as a clean and stable operating system and my distro of choice.

At the Bioinformatics Open Source Conference (BOSC) 2011 in Vienna I got in touch with the DD Steffen Moeller, who introduced me to the Debian Med team. This connection has been strengthened by my regular participation in the Debian Med Sprints from 2012 to 2016. Since I have been active in the team I have introduced or adopted more than 20 packages, for some of which I am also upstream. Most of them have a sequence analysis focus but I would also like to broaden my involvement a bit. Doing this I also started reaching out to other teams, e.g. Debian Perl Group or Privacy Tools team, where I also maintain one or more packages. I also have recently started preparing backports (via my sponsors), contributing to Debian Med's Ubuntu PPA, and submitting reproducibility patches for other packages. I became a DM in 2012 and have been doing my own uploads since then, holding DM permissions on most of the packages mostly maintained by me.

Recently I moved further into the security community, as a consequence of leaving academia and the scientific computing field to focus on security engineering. I am hoping to be able to contribute to related teams in Debian.