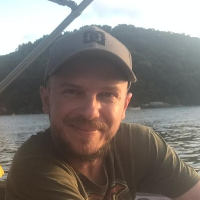 I received a Ph.D. degree in telecommunications and networks from the Federal University of Technology - Paraná (UTFPR), Curitiba, in 2020. Since 2012, I am a professor of Computer Networks and Computer Programming, at the UTFPR.

Around 2004 I joined a local Debian User Group (Brazil, Paraná) and I helped to organize some install fests.

Between the years 2007 to 2012 I was working at UTFPR as systems analyst. I used Debian on all servers of campus Dois Vizinhos. I also used Debian for LTSP in the Desktops of some labs.

In my M.Sc. [1] I worked with Linux kernel (2.6.34). I implemented a new network schedule named NGWA. For NGWA to work, I also needed to change some parts of TCP and IP stack. Also, on M.Sc. I made a port and validation of Random Early Detection (RED) from network simulator (ns-2) to ns-3 [2].

I'm also a professor in graduate courses where I use Debian to teach GNU/Linux, scripting languages, and web security.

My first contribution to Debian packaging was in 2008. Since August 2021 I've been Debian Maintainer. Currently, I maintain seven packages in the main section -- and I have one pending upload. I did 11 NMUs and seven QAs.