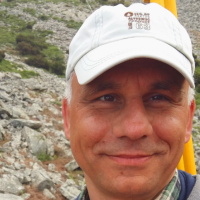 My first, but short contact with Linux was around 1996 by getting a distribution SuSE 5.x installed by a friend. By lacking enough free time for getting better knowledge and really expensive costs for getting online help there was three more years needed to get then restart with a SuSE 7.1. A little bit disappointed about the need to get every thing reinstalled by a upgrade to 8.x I was then switching to Debian as all the friends saying that Debian hasn't such a requirement.

I was using a modified Knopper Live Distribution called Kanotix and was really happy with it. The first time the most of things are working out of the box, even the Radeon Display card in my Laptop. Some years later after learning a lot how Debian is working under the hood I was then switching to a native Debian installation, I think it was the Lenny release.

Also changing the employee and meeting a lot more people that working with Debian daily, and most of them are friends today. On this way I was realizing that the Debian Maintainer (now also a Debian Developer) of the Icedove package was a college of mine. This made a lot of things easier to me, I was more getting in touch how the technical things are working in Debian and of course one day the question was arising how is this packaging thing done. This was was the point I'm getting involved into the maintaining of the Icedove package in 2009/2010.

In 2013 I was taking the chance to attend a DebConf for a first time. Great experience with a lot of interesting people in Vaumarcus Switzerland!

Because I wasn't really understanding how CDBS was working by this huge count of variables and not easy to understand names and lines of code in side the rules file for Icedove I started to migrate the Icedove package to the debhelper sequencing mechanism in 2014. I also started to maintain my own package for Debian, the sogo-connector.

On DebConf 15 in Heidelberg I started the (old) process for became a Debian-Maintainer, which finally succeeded then in late October 2015.

I also started in late 2015 to package the libcoap library for Debian, a project there I'm also involved upstream. 2016 I was going a little back to my original private interests and restarted to do more "tangible" things based on the idea of IoT and created some PCBs that was bringing me to KiCad, that is also packaged in Debian. As there was no repository with the packaging stuff I started there to integrate the Debian packaging into a git-buildpackage based system to improve some actual things and provided my work to the maintainer of this package. After some contact and communication with Georges KiCad is now living on Alioth and Georges was also granting upload rights to me.

And if then there is some free time I'm working also in the pkg-giraffe group on Alioth to get groupware more attractive in Debian.

My first, but short contact with Linux was around 1996 by getting a distribution SuSE 5.x installed by a friend. By lacking eno… Expand