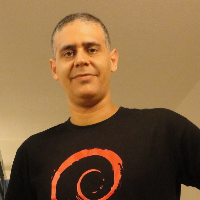 I am an officer in the Brazilian Army, professor of the Digital Investigations Postgraduate Course at Catholic University of Brasilia and author of the four books.

I started with GNU/linux and free software at 1997. I was a network manager and a friend told me about GNU/Linux. So, I started the GNU/Linux use. I used Slackware at 1997, RedHat from 1998 up to 2003 and Debian since 2004. Currently, my actuation areas are networks, security and forensics.

I have published four books and the last two uses Debian. Discovering the Linux (Descobrindo o Linux, in Brazilian Portuguese) was published at 2006 at the first time. I put this book in Debian list[1]. The third edition was published in 2012 and has 928 pages[2]. The book uses Debian all the time and is a nacional reference in universities. The last book, published in 2013, 416 pages, was Traffic analysis in TCP/IP networks (Análise de tráfego em redes TCP/IP, in Brazilian Portuguese)[3]. This book uses Debian and several tools being installed by apt-get command along the his pages.

In Brazilian Army, I was the mentor of the Debian adoption as OS for servers in 2004[4].

I am teacher in post graduate courses and I use Debian to teach Linux, forensics and networks to my students.